Why does older people housing matter for all of us? 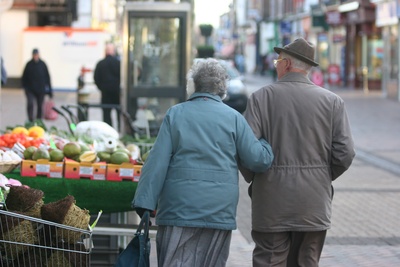 Age UK has recently published its 'Housing in Later Life' report looking at some of the key issues affecting the housing choices available to all of us as we get older. This coincides with a number of important policy developments including the announcement of a new accessibility standard for all newly built homes, an increased focus on the deployment of adaptations services to help older people live independently, the Care Act 2014 placing greater emphasis on the role of housing in the delivery of health and social care, and calls for a dramatic increase in the supply of retirement housing to extend the options available to older people.

There are four and half million households containing at least one person with a mobility problem, aged over 60. This figure is likely to increase as the population rises. Over the next two decades it's estimated that the number of older households will rise to 13 million. There will be 20 million older people over 60 in the UK by 2030. Yet the majority of us live in inflexible housing that can be difficult to adapt as our needs change. It is estimated that only 3.4% of all homes have the four basic accessibility features that would allow someone with a mobility problem to simply visit.

As part of releasing its new report, Age UK reviewed some of the costs of failing to offer suitable housing to an ageing population. From NHS statistics we discovered that patients had to stay in hospital, on average, an additional 27 days due to a lack of home adaptations and unsuitable housing conditions. This is more than 40,000 days over the year - costing an estimated £11.2 million. Falls at home, resulting in a hip fracture costs the NHS £12,300 for each operation. Yet basic measures to reduce the risk of falls, such as installing a grab rail, costs around £40.

There is overwhelming evidence to show that damp, cold housing, in a state of disrepair, can result in a range of medical problems including respiratory problems, arthritis, heart disease and stroke. The expert housing agency, the Building Research Establishment (BRE), estimated the cost of poor housing to the NHS as £600m a year. Given this, it must make sense to invest in preventative measures that help older people avoid these problems and allows them to remain active and independent.

The role of housing for the health and wellbeing of older people is now clearly recognised in guidance to the Care Act 2014. This makes the case for incorporating housing support into health and social care services. However, this is problematic for places that lack basic housing support services, such as a home improvement agency, or have seen services cut.

An essential source of help for vulnerable older people is Disabled Facilities Grant. But payments can be delayed and some older people are forced to wait months or years to obtain help. There is huge pressure on local authorities to deal with acute social care needs rather than invest in preventative adaptations - which can offer substantial savings over the longer term. The average cost of a Disable Facilities Grant is £6,800. This is a small amount in comparison with the cost of staying in hospital or being forced to move into residential care, which can cost over £26,000 a year.

As well as improving adaptations and other housing support services Age UK is arguing for improvements in the design of all new homes. We believe new houses should comply with basic accessibility standards - known as the lifetime homes standard - which makes it less costly to adapt a home - if required. The lifetime homes standard is a set of 16 criteria which cover things such as the potential for a downstairs bedroom, shower or WC, the ability to install a stair lift, sufficient turning space for a wheelchair, and inclusive controls, handles and levers that work for everyone. The average cost of providing these features is £1,500, a small amount when compared with the savings achieved by reducing demand on health and social care resources.
It's vital we improve the standards in ordinary housing for older people, as well as specialist retirement housing. Why? Because the vast majority of us will end up living in mainstream housing, not retirement housing, as we get older.

Age UK argues that we need a greater range of housing options that meet a diversity of different needs as we age. Age UK is particularly interested in specialist housing that can provide an alternative to residential care. 'Extra care' housing is one of these alternatives which can offer residents stronger housing rights as tenants and give them more control over how their care is provided – if they need it.

As well as presenting housing options, we need to offer older people greater help with independent information and advice, so they can make informed choices. There is an increasing need for specialist forms of advice that combine help with housing, care and finance. A number of local Age UKs are delivering specialist housing advice through the First Stop advice initiative, funded by DCLG. This programme is funded until March 2015, but we hope it will be extended.

Older people's housing is not an obscure or marginal issue and it's something which is going to affect all of us – so we need to act now and take a longer term view.